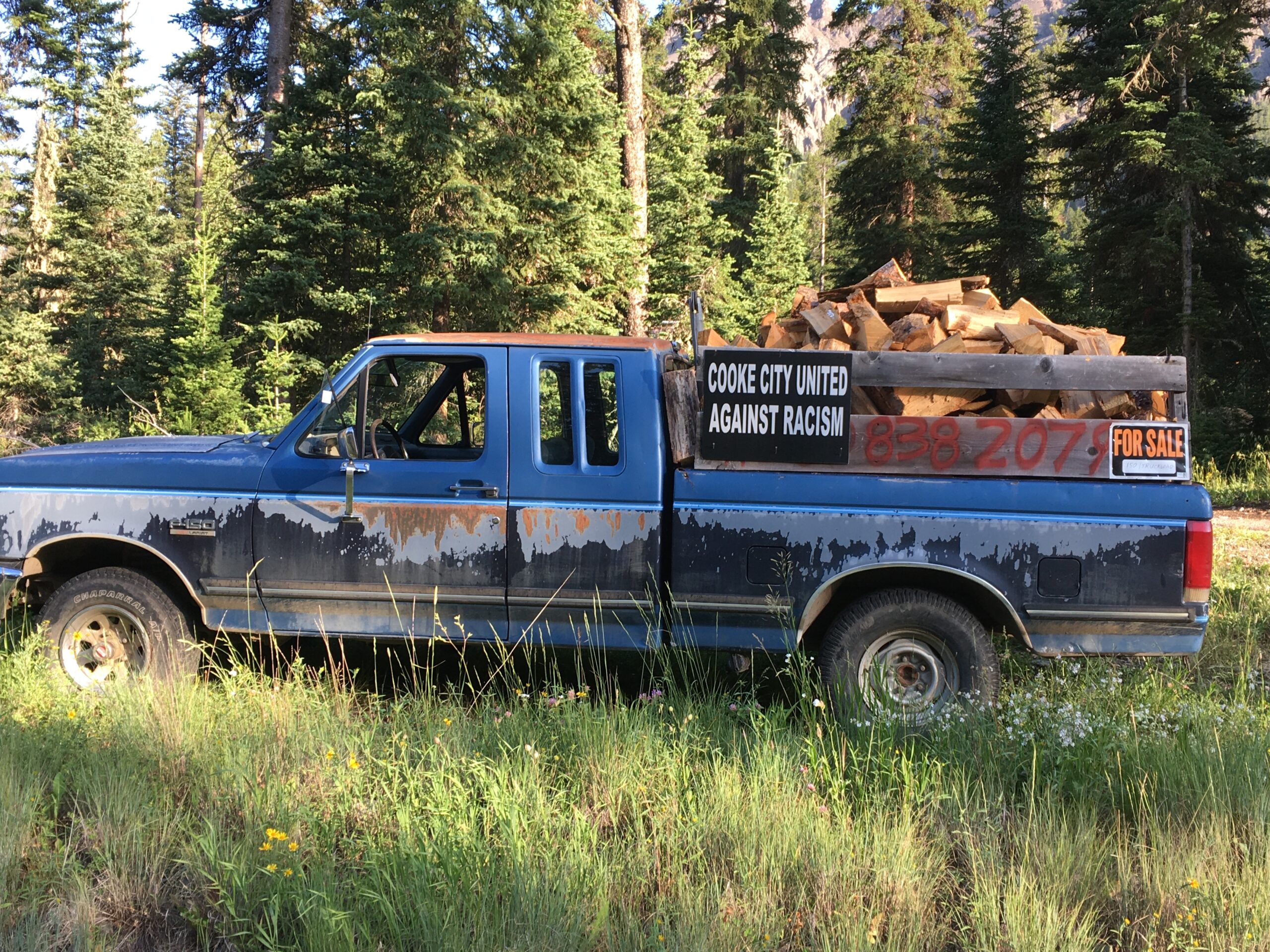 It was the pandemic summer of 2020.  To escape the virus and the news I had decided to go fishing.  For two months I traveled some 7500 miles through the upper Midwest and West fishing in eighteen different rivers and streams.  I stayed off the interstates, shut off the news, took my meals in small cafes, bars, and bakeries located in towns that barely made the map.  At the end of my travels family and friends asked what the best part of the trip was.  It wasn’t the fishing.

My trip had been launched by my wife, Marcia. “I think you should hook up the trailer, go to your sister’s memorial, and then go fishing until you get tired of yourself.  I’ll be here when you come home.” My sister Jean had died on the last day of 2019 and her memorial service, rescheduled several times due to the pandemic, was slated for the end of June in northern Michigan. “You’ve always wanted to be a trout bum, now’s your chance,” she added.

Marcia also knew I wasn’t sure what to do with myself. I had recently retired after over forty years of working in public education. Movie theaters, restaurants, the little community center where my band played for monthly dances were all closed. She meant well, but there was too much truth in her closing argument: “It’s not like there’s a lot for you to do here.”

We have a thirteen-foot travel trailer named Charley in homage to John Steinbeck’s Travels with Charley. The day after Marcia’s suggestion I began a list of what I would need and where I would pack things.  I filled Charley with clothes, food, my fly rods and fly-tying kit, portable grill, some books I wanted to read and a novel I wanted to write. I have to admit that, like Steinbeck at the start of his road trip, I hoped something would keep me at home and in my own bed.  It did not.  A week after Marcia first suggested it, I left our home in Amesville, Ohio for the open road.

I had put off my departure until the last possible day. Thus, I had to drive over 500 miles on day one in order to arrive at my sister’s in time for the memorial. It was a mistake. Traveling on interstate highways I battled potholes and wind turbulence from passing trucks. In my rearview mirror I could see Charley bounce around on his single axle, scattering onto his floor my poorly packed possessions and foodstuffs. To try and stay awake I had toggled my satellite radio between CNN, FOX, MSNBC, and NPR and heard the same ‘breaking’ stories over and over. When I finally made it to bed that night I was still in motion and couldn’t get to sleep. Less than twenty-four hours into my trip and I was thinking about heading home.

The next day family and friends spoke fondly of Jean at the lake side service. Her ashes were spread in the flower gardens of the home she loved. I caught up with family members I don’t see all that often.  We’re a big group. My father married four times that we know of and had eight children with two of his wives.  But that’s another story.  That night after most everyone was in bed, I was sitting on the porch watching the moon rise over the lake with my niece Linda.

“Where are you headed to next, Uncle George?” She asked me.

“I’m not sure yet.”  We sat quietly for a few minutes.  With my thumbnail I idly scraped the label off the bottle of water I was drinking. “I do know one thing.  I need to get away from the news and slow myself down if this trip is going to be any fun at all.”

The next morning over coffee and a cinnamon roll I worked out how to restart my trip.  In my dog-eared atlas, I plotted a route north and then west that would avoid the interstate highways.  The day’s goal was to wander along Michigan Route 2 West, a two-lane road in the upper peninsula that cut through the middle of every small town on the north shore of Lake Michigan.  From there the route was unclear. Before starting out I changed my radio presets to music-only stations. I sensed that no matter how long I would be on the road the ‘breaking news’ was not going to change. I wanted to turn off the shouting heads and quit trying to keep up with the restless pace of the interstates. That’s how I ended up in Cooke City.

Located at the east entrance to Yellowstone National Park, Cooke City’s permanent population is around one hundred. During the summer tourist season that number balloons to three hundred plus.  Several restaurants, hotels, a general store, two gas stations, and multiple coffee shops and bakeries line the main street.

There’s a public school for grades kindergarten through eighth. This year there will be five students, one each in kindergarten, first, and sixth grades and two in third grade. Lara, the one teacher, told me that she does “basically everything, with teaching being first.” Snow remover, janitor, small repairs, van maintenance, school maintenance, requesting resources, field trips, state testing, special education, and composter duties are listed in her contract.  “I do the greenhouse too, and hopefully chicken coop duties to come in the near future,” she added. When students go on to middle or high school their families usually move.  In years past parents have driven older children to school in Gardiner, some sixty miles away through the Lamar Valley.

Kara and I stood on the coffee shop patio watching the town slowly wake up. She told me more about the signs.  “We were worried that visitors might have the wrong impression of us.  With the Fourth of July coming up a local guy printed up the signs and went around asking if people would like them.  Pretty much everybody took one.  After the Fourth he came around to get them back. A lot of us wanted to keep them up.  To welcome people. To let them know that just because we’re a small, rural, white town it doesn’t mean that we’re racist.”

“That was the intent.” I talked with Chris who had had the signs made and went around town putting them up. He explained that the signs were not so much directed at locals. “Overt racism is not so much a problem here. But over half a million people come through Cooke City every year and I wanted to challenge their assumptions about the people that live here.”  He knew people might see Cooke City and other towns like it as an oasis of gun-toting, don’t-tread-on-me types.  His goal, he explained to me, was to let visitors know that “people who live here can be conservative, be a hunter, own a sawmill in the middle of nowhere and not be a racist. Know that people who live in small towns like this don’t all think one way politically or socially. That even when we disagree, we do hold some things in common, and treating people with respect and dignity is one of those things.”

I was over a month into my trip the day I stopped in Cooke City.  Getting coffee at Pilot’s Perk and talking with Kara helped bring into focus the notes, photos, and mementos I had been collecting along the way.  Taking the back roads let me see an America that wasn’t making the twenty-four-hour news cycle. The people I met and the places I visited would confound the ‘shouting heads’ and put the lie to charcutiers of rural life they promulgated.

In Door County, Wisconsin, I had met Pat who, with her husband Mark, is holding on to a small cherry orchard the family has owned since 1915 by developing value-added products like jams and pastries.  She teaches what she has learned to other farmers and urban dwellers and helped start numerous community kitchens. Wandering the small highways of Minnesota, I bumped into the town of Harmony.  In 1962 Harmony residents self-financed a manufacturing plant that has kept locals employed, first making shanties for ice fishing and today producing heavy equipment bundling machines for recycling cardboard. It’s a place, as one resident told me, where people “try to live up to the name of the town.” In Iowa and Wisconsin, I fished rivers that were once full of silt and waste, too warm and shallow to hold trout.  Now, with the collaboration of farmers, conservationists, and anglers the region boasts over 17,000 miles of clean, clear water with some rivers holding upwards of 3,000 trout per mile. In North Dakota I spent three days with a man trying to save his town by erecting, along with a team of volunteers, the world’s largest scrap metal sculptures. I stopped in local museums filled with everything from a complete one-room schoolhouse to the world’s largest steer. I sampled delicious baked goods and meals served by chefs and bakers who had relocated into abandoned buildings, determined to do what they could to boost the economy of their hometown.

The people I met in these rural communities were not unaware of the troubles abroad in the land.  Friends had died in the pandemic and neighbors had lost jobs.  They were tormented by the brutal treatment of people of color at the hands of the police they saw on their televisions. There were skirmishes in their own communities as well.  “I’m not wearing a mask, no one can tell me what to do,” a guide told me in a fly-fishing shop. He also made sure I bought a fishing license.  There was the pickup truck with two large American flags on its bumper sporting a sign saying: “How do like these flags, liberals!” I was told the owner liked to park the truck next to cars with license plates from New York and other so-called blue states. Back in Cooke City a couple of the signs were run over or torn down.  After the seditious riot in Washington, I talked with Chris and told me he was taking down the last of them.  “I don’t want some idiot with a brick and a grudge to take out someone’s window,” he explained.

Despite these reminders of what divides us, most of the people I met on the backroads of American were trying hard to unite us. By chance I had found ordinary people doing extraordinary things.  Women and men working to hold on to what was good about where they lived and make it even better—for everyone. They would be the answer to the question of what the best part of my trip was.  Borrowing from the poet Carl Sandburg, the best part was “the people, yes, the people.”  People far from the national stage, unnoticed by the media, living important, albeit quiet, lives. They have stories that deserve to be told.  Stories that need an outlet.